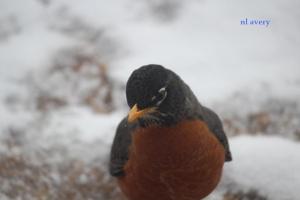 For those who live in a hemisphere that awards the four seasons, it is winter that challenges us to be creative in ways that the other seasons do not. And though we often find ourselves cursing the cold temperatures, there are some who are most fortunate enough to be able to turn discomfort into pleasure… There are some lucky folks that can defrost frosty sentiments by a warm fireplace. In these homes cold hands are reminders to make a mug of hot chocolate, while icy feet walk themselves into a pair of woolly slippers.

And though many would prefer to remain indoors so as not to be bitten by its harsh winds; if you take a look from your window, winter has invited into its world some very enchanting visitors, birds. Look closely among the leafless branches, under the holly bushes, or flitting to and fro, and you may find quite a variety of winged guests, which makes you wonder how it is that they are not cold.

Against the whiteness of snow one notices the scarlet head crest of the cardinal, the black caps and bibs of the chickadees, the iridescent green and purple flossed head of the starlings, and hidden in the house eves are the rust colored sparrows. The birds of winter are like pieces of a rainbow that have broken off and flutter from snow crest to crest; they delight our world from our safe warm place in the winter.

Today’s post introduces the literary naturalist of the ninetieth century,
the esteemed thinker: John Burroughs (1837-1921). Born in Roxbury, N.Y., he is credited as an essayist, environmentalist, and the man who revolutionized the “conservation movement” in the United States. Burroughs quest to become a writer turned favorable when he befriended the poet Walt Whitman, who encouraged him to continue the path he loved. His writings and studies regarding nature later granted him the title of, “The Grand Old Man of Nature.” Best known for his observations of birds, flowers, and rural America, it is his quote that exemplifies his true feelings; “I seldom go into a natural history museum without feeling as if I were attending a funeral.”

From his book titled, Birds, and Bees Sharp Eyes and Other Papers, I have prepared a brief reading. Find a quiet moment to take in the sights revealed by our essayist and champion of nature, Mr. Burroughs….

“…These sparrows are becoming about the most noticeable of my winter neighbors, and a troop of them every morning watch me put out the hens’ feed, and soon claim their share. I rather encouraged them in their neighborliness, till one day I discovered the snow under a favorite plum-tree where they most frequently perched covered with the scales of the fruit-buds. On investigating I found that the tree had been nearly stripped of its buds—a very unneighborly act on the part of the sparrows, considering, too, all the cracked corn I had scattered for them …

… The bird that seems to consider he has the best right to the bone both upon the tree and upon the sill is the downy woodpecker, my favorite neighbor among the winter birds His retreat is but a few paces from my own, in the decayed limb of an apple-tree which he excavated several autumns ago. I say “he” because the red plume on the top of his head proclaims the sex. It seems not to be generally known to our writers upon ornithology that certain of our woodpeckers—probably all the winter residents—each fall excavate a limb or the trunk of a tree in which to pass the winter, and that the cavity is abandoned in the spring, probably for a new one in which nidification takes place. So far as I have observed, these cavities are drilled out only by the males. Where the females take up their quarters I am not so well informed, though I suspect that they use the abandoned holes of the males of the previous year…”