There are three primary colors, red, blue, and yellow, and three secondary colors, orange, purple, and green, which are created by mixing one primary color with another. For example: if you mix a dash of yellow with a dash of red you will produce orange. For our youngest members of society, this in itself is magic. As we turn our colors from one shade to another, we can become more creative with the names. Dark blue, resembling the night sky, can have the moniker of “midnight blue”, while a more vibrant blend of blue and green may be referred to as “turquoise”.

But it was just recently; upon a re-voyage to the Caribbean Sea that I decided the names of the blues did not satisfy my request for identification of the water’s color. There seemed to be nothing on the “proverbial” palette that would announce such grandeur, such beauty, for as one would venture from wave to wave, the sun upon the surface changed the blues like a chameleon dashing from leaf to leaf.

And so, my tongue was tied to the usual color selections however, I know better than to hold such radiance hostage within the framework of the color-wheel.

Today’s blog introduces the esteemed thinker: George Field (1777- 1854), the British chemist, who helped alter British painting both aesthetically and practically. It was during the industrial revolution that an increased knowledge of chemistry allowed early nineteenth-century painters to benefit from the most dramatic increase in the number of new natural and synthetic pigments and refined color processing developments. Field, buttressed his theories with reliable information about light-fast, durable pigments, all based on his own scientific experiments and manufacturing processes.

In 1835, he published Chromatography, although already recognized by professional painters as London’s most important color-maker and supplier.

I now bring you a piece of his writing from FIELD’S CHROMATOGRAPHY; OR, TREATISE ON COLOURS AND PIGMENTS AS USED BY ARTISTS. From the essay, The relations of harmony and colour, here is something to ponder.

“Assured as we must be of the importance of colouring as a branch of art, colours in all their bearings become interesting to the artist, and on their use and arrangement his reputation as a colourist must depend.
Colour, remarks Ruskin, is wholly relative; each hue throughout a work is altered by every touch added in other places. Thus, to place white beside a colour is to heighten its tone; to set black beside a colour is to weaken its tone; while to put grey beside a colour, is to render it more brilliant. If a dark colour be placed near a different, but lighter colour, the tone of the first is heightened, while that of the second is lowered. An important consequence of this principle is, that the first effect may neutralize the second, or even destroy it altogether. …

We learn from these relations of colours, why dapplings of two or more produce effects in painting so much more clear and brilliant than uniform tints obtained by compounding the same colours: and why hatchings, or a touch of their contrasts, thrown as it were by accident upon local tints, have the same effect. We see, too, why colours mixed deteriorate each other, which they do more—in many cases—by imperfectly neutralizing or subduing each other chromatically, than by any chemical action. Finally, we are impressed with the necessity, not only of using colours pure, but of using pure colours; although pure colouring and brilliancy differ as much from crudeness and harshness, as tone and harmony from murkiness and monotony.

The powers of colours in contrasting each other agree with their correlative powers of light and shade, and are to be distinguished from their powers individually on the eye, which are those of light alone. Thus, although orange and blue are equal powers with respect to each other, as regards the eye they are totally different and opposed. Orange is a luminous colour, and has a powerfully irritating effect, while blue is a shadowy colour, possessing a soothing quality—and it is the same, in various degrees, with other colours …”

Educating children and teens is our first defense in helping prevent skin cancer later in life!

A digitally free copy is available to upload …. teaching our our kids to be ‘sun safe’ is a smart choice! 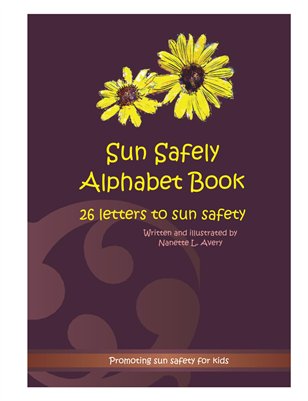 By Nanette Avery in Sun Safely

An illustrated alphabet book promoting sun protection for kids! It’s as easy as A to Z to learn how to be sun safe and protect yourself from the harsh rays of the sun. Follow each of the 26 letters and learn how to be sun smart! Find out how animals like elephants, rhinos, meerkats, and even polar bears protect themselves from the sun. Both parents and children will be encouraged to “sun safely”!

If you wanted to know where to look for advice you would only have to twist your head from side to side for it rests on both of your shoulders. Advice are those “either or suggestions” that we grapple with; they are the suggestions we often do not know which one to adhere to. For when we are in need, both sides can be ever so convincing.

Advice is the food we feed our indecisions, sometimes it is fattening…filled with saturated fats and sugars….not very good for us but very satisfying; and then there is the more nutritious proposals, not as immediately fulfilling but in the long run more wholesome. And there lies the problem, which advice to ignore and which one to adopt; for as we twist our head from side-to-side, our hunger for contentment amplifies. Perhaps this is why many a person has succumbed to advice that grants immediate rewards… deciding to attend to the details later. But when “later” comes round such advice heaves and sighs under the weight of debt and disappointment. And with poor advice it is often too late to realize that like unwanted calories, debt increase at a rate where suddenly we are quite a bit stouter.

Alas, the burden of deciding which advice to take is not easy. And wouldn’t it be nice if there was the proverbial crystal ball that could tell us which side of our head to listen to. But like the little devil and angel on either shoulder, we can only hope our choice is correct.

Today’s post returns to you a man who presumes to have the right advice: the esteemed thinker: P.T. Barnum (1801-1891). Although the Barnum name is part of the American circus legacy, Mr. Barnum was 61 years old when the circus collaboration was presented to him. It was in his marketing ingenuity and genius that brought him to the forefront of 19th century society. He crafted his life by taking chances and making changes. He was mostly successful in business although at times suffered for under his miscalculations

From his book The Art of Money Getting, I have extracted some words of advice in the essay, “Avoid Debt”.

“Young men starting in life should avoid running into debt. There is scarcely anything that drags a person down like debt. It is a slavish position to get in, yet we find many a young man, hardly out of his “teens,” running in debt… Grunting and groaning and working for what he has eaten up or worn out, and now when he is called upon to pay up, he has nothing to show for his money; this is properly termed “working for a dead horse.” I do not speak of merchants buying and selling on credit, or of those who buy on credit in order to turn the purchase to a profit…

Money is in some respects like fire; it is a very excellent servant but a terrible master. When you have it mastering you; when interest is constantly piling up against you, it will keep you down in the worst kind of slavery. But let money work for you, and you have the most devoted servant in the world. It is no “eye-servant.” There is nothing animate or inanimate that will work so faithfully as money when placed at interest, well secured. It works night and day, and in wet or dry weather…”

There are very few things that everyone likes however if I had to make a guess, I would have to surmise that a bit of “civility and politeness” would be such a pair we all yearn for. For who does not enjoy receiving a simple “please and thank you,” which are delivered without monetary cost. And knowing that all persons like these bits of politeness added to a conversation one would think that they would be scattered about like ants at a picnic. Yet, to our dismay, civility is not the norm everywhere, but rather present in some places and vacant in others. Like climate, we find that some folks are generally pleasant, spreading their politeness about like a summer breeze, while in other regions we find the population lacking in their pleasantries like a late winter storm.

But let us look at civility not as a luxury but as something that can be freely expressed; and so if we give it away, let us hope that the recipient will forgo their miserly disposition and reciprocate with an equally pleasant bit of civility. It is curious to see that though it is free, it can reap benefits beyond its original façade.

Today’s post introduces the esteemed thinker: P.T. Barnum (1810-1891) a man whose life encompassed the entire nineteenth century, a man who employed and some say exploited the culture and technology of his era. Barnum was an author, showman, and visionary that often scandalized his contemporaries.

Born in Connecticut, Barnum was both a brilliant and shameless promoter often accused of fraud as well as believing there was no such thing as bad press. Barnum’s success will always be connected with the great American circus, although it is believed that his greatest success arrived when he presented European opera star Jenny Lind to the American public (1850). “The Swedish Nightingale” sang 95 concerts for Barnum.

And so, I bring to you the advice from a successful but often scandalous showman; from his book, The Art of Money Getting or Golden Rules for Making Money here is a snippet from “Be Polite and Kind to your Customers,” Mr. Barnum! (For the curious… P.T. stands for Phineas Taylor)

And though we may not agree with his methods, we all must agree that he obtained success.

“Politeness and civility are the best capital ever invested in business. Large stores, gilt signs, flaming advertisements, will all prove unavailing if you or your employees treat your patrons abruptly. The truth is, the more kind and liberal a man is, the more generous will be the patronage bestowed upon him. “Like begets like.” The man who gives the greatest amount of goods of a corresponding quality for the least sum (still reserving for himself a profit) will generally succeed best in the long run. This brings us to the golden rule, “As ye would that men should do to you, do ye also to them” and they will do better by you than if you always treated them as if you wanted to get the most you could out of them for the least return. Men who drive sharp bargains with their customers, acting as if they never expected to see them again, will not be mistaken. They will never see them again as customers. People don’t like to pay and get kicked also…”