We are all too familiar with the quotes “Dog is Man’s Best Friend”; however, despite these bits of sentimentality we also must acknowledge that not all people agree with these statements. In the underlayer of humanity, there exists a cruelty to animals. Hoofed, pawed, web footed, and winged; animals regardless of their species are often mistreated.  They are the voiceless creatures whose barks and meows, neighs, and brays are often not ever heard. Only when they are physically abused do their human counterpart sense their despair. Fortunately, there is an organization that hears their voices, The American Society for the Prevention of Cruelty to Animals. It is their mission to “to provide effective means for the prevention of cruelty to animals throughout the United States.” So, when you hear the idiom, “Crying crocodile tears”, it just might mean something different than you think to the crocodile.

Today’s post brings you the esteemed thinker: Henry Bergh (1813-1888) aka “Angel with at Top Hat”. Philanthropist, animal crusader, founder of the ASPCA, he was born in New York into a wealthy family. His father, a highly successful shipbuilder, died when he was young leaving his son to inherit a fortune. Bergh’s notoriety grew in social circles that included the political elite of his time as well.  He supported abolitionist positions and gained appointment to Lincoln’s cabinet as an American Delegate to Russia. As a result, he traveled extensively. It was during his travels that he became greatly impacted by what he saw, cruelty to animals. In Russia he witnessed peasants beating horses and was shocked by the violence of Spanish bullfighting. 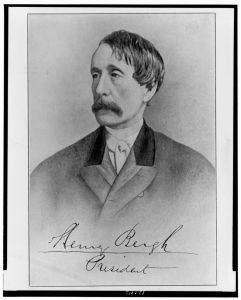 Driven by this suffering and injustice of the treatment to animals around the world and in the United States he decided to devote himself to these “mute servants of mankind”. In 1866 he drafted a Declaration of the Rights of Animals, proposed a society to protect animals. these creatures and offered his proposal at Clinton Hall. On April 10, 1866, a charter incorporating the American Society for the Prevention of Cruelty to Animals was signed and the following week, an anti-cruelty law was passed granting ASPCA the power to enforce such laws. The ASPCA agents were often referred to as “Berghsmen”.

His work for animals did not stop with the ASPCA, he soon earned the moniker of “meddler” when he installed drinking fountains for working horses and fought to put an end to dog fighting and cock fights. He also invented the clay pigeon, to spare live birds from sport shooters and carried on a high-profile dispute with P.T. Barnum over the treatment of the animals in his menagerie.  However, Bergh’s persistence and integrity eventually turned Barnum into a friend.