There was a time, not too long ago, when there existed ‘wonderment’. It occurred in an ordinary day, during an ordinary hour, doing perhaps something considered ordinary. Hanging out the laundry on a clothes line, and suddenly a rainbow would appear. Watching a magic trick where a man in a black cape would retrieve a rabbit out of his top hat, or a telephone call from America to Europe; all these things created a smile, a moment of awe, an appreciation for what appears and feels like magic…

The age of wonderment was an era when extraordinary things were not taken for granted; all eyes were glued on the television when we landed a man on the moon, and all were amazed at the first heart transplant. To think our ability to become mystified has all but disappeared is a great loss indeed.

Wonderment to the 21st century person may be a feeling that has essentially become numb. So much goes by unnoticed, ignored, and not even a footnote in the news. And so, lament we should for those who may have lost a uniquely human quality, the ability to be wowed. 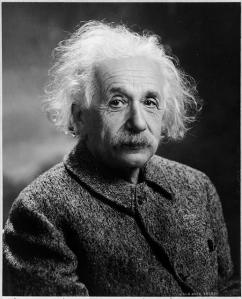 Today’s post brings you the namesake of this blog, the esteemed thinker: Albert Einstein (1879-1955). Little introduction needs to be made for he is clearly a wonderment. Born at Ulm, in Württemberg, Germany, Einstein is one of the most influential physicists of the 20th century. Acknowledged for having developed the special and general theories of relativity, in 1921, he won the Nobel Prize for physics for his explanation of the photoelectric effect.

From his book titled The world as I see it (1949), I have prepared a small parcel for you to read. For within this small passage one will see that even a pragmatic mind like Einstein had time to appreciate the wonderment and mysteries of life.

“…The fairest thing we can experience is the mysterious. It is the fundamental emotion which stands at the cradle of true art and true science. He who knows it not and can no longer wonder, no longer feel amazement, is as good as dead, a snuffed-out candle…”