Protesting is an exercise we have performed throughout the ages. People living in all lands around globe have declared and aired their disagreements sometimes peacefully and sometimes not. The method of protesting however has changed in comparison to the centuries prior to the current millennium.

The dumping of tea in Boston Harbor was a dramatic display of injustice by a defiant group of colonists, Sons of Liberty, in 1773. The call to join the efforts was rallied by word of mouth, a clandestine ploy where colonists went as far as disguising themselves as Native Americans and slipped aboard a British ship and relieved them of their cargo. In contrast, today’s call to protest often comes in the form of a text message where the silent voices are set free to cast their opinions world-wide, and in a matter of seconds their message is heard and repeated. And though the methods have changed over the centuries the demand for change is the similar.

Today’s blog brings you the esteemed thinker: Rev. Owen Whitfield (1892-1965). Born in Jonestown, Missouri to a sharecropper family, he himself became a sharecropper as well as a Reverand. By the mid-1930s the Great Depression was taking an extraordinary toll on poor tenant farmers whereby the federal government and its new subsidies was making it more profitable for landowners to dismiss their farmers. Seeing the plight of African American tenant farmers like himself and other poor farmers he rallied support for change. 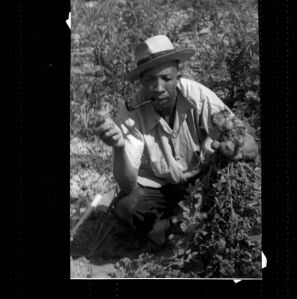 In 1937 Whitfield joined and later became president of the Southern Tenant Farmers Union, a multi-racial group of advocates. In 1939 he brought to the attention of the cause to President Franklin Roosevelt, explaining in a letter the exploitation of the tenant farmers and requesting changes be met.

Whitfield was instrumental in helping bring about reform, most notably by way of organizing The 1939 Roadside Sharecroppers Demonstration, a peaceable protest in Southeast Missouri. More than fifteen hundred men, women and children piled their meager belongings along US Highways 60 and 61 in the lowlands, also known as the Bootheel. Tenant farmers had been ruined by environmental disaster, falling crop prices, poverty and disease, New Deal agricultural policies, and the mechanization of cotton production. Now landowners had decided to hire day laborers to replace their tenants. Families who normally expected to occupy a plot of land for a year or more face seasonal employment with no guarantee of work or shelter.

Due to death threats, Whitfield did not participate in the demonstration but rather rallied politicians in the north for support. His efforts were effective and the government did begin to initiate some changes beginning with housing; the Delmos Security homes were erected for 600 farmers.