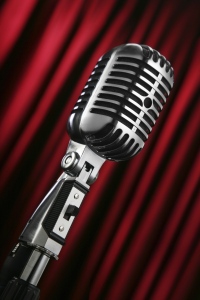 Humans are a most adaptable creature. We are constantly encountering new people and new activities; and without missing a beat able to continue about our daily routines. We sample new foods, travel to exotic places, replace old ideas for new, and exchange banter with total strangers. However, in spite of our adaptable behavior, though not always willingly, there is one activity that can make the strongest of persons weak in the knees, terrify the boldest of souls, and mortify the most valiant . No, it is not a ride on a roller coaster or parachuting out of a plane, but simply the mundane task of public speaking.

For some, standing before an audience, regardless of the group’s size; be it on a grand scale as in an auditorium or an intimate gathering of a handful of colleagues, speaking before others can suddenly be converted into a most terrifying experience. And even though there are techniques designed to set these fears aside; even with the color coded notes cards prepared, the power point slides that are waving across the screen, and the overly practiced presentations before a spouse, these so called “tricks of the trade” are still not enough to keep at bay the heightened heart beat, dry mouth, and urgent need to melt into ones shoes and wishfully disappear from sight.

It is rumored that even some of our greatest leaders and entertainers suffered from stage fright, which makes us ponder this notion. Does it help one feel less hungry knowing that there are other patrons equally as famished when you are waiting to be served in a crowded restaurant? So, when you are advised to take a deep breath because even Winston Churchill was so frightened in his early career that he froze up when delivering a memorized speech before Parliament… you may momentarily feel better with the fact that you are in good company, but as you stand before the silent audience it is your wobbling stomach and dumbfounded brain that needs to be reminded!

Today’s post reintroduces the esteemed thinker: Igor Stravinsky, Russian born composer (1882) who brought modernism to the world of music in the early 20th century. As a gifted musician, his compositions ranged from vocal and instrumental pieces, ballet, cantata, to Neoclassical works, oratorio and sacred music. When World War II broke out, Stravinsky fled Europe and came to the United States, where he settled in California, eventually becoming an American citizen in 1940. His influence in music continues to reign today long after his death in 1971 .

I now bring you the composed words from Mr. Stravinsky’s autobiography titled, An Autobiography. Though I have assembled just a few bars and set aside them for your pleasure; they will surely be most enjoyable…

“… While learning by heart the piano part of my Concerto, I had simultaneously to accustom myself to keep in mind and hear the various parts of the orchestra, so that my attention should not be distracted while I was playing. For a novice like myself this was hard work, to which I had to devote many hours every day.

My first public performance of the Concerto took place at the Paris Opera on May 22 at a Koussevitzky concert, after I had played it a week earlier to an intimate gathering at the Princess de Polignac’s with Jean Wiener playing the accompaniment on a piano.

At the beginning of my career as a piano soloist I naturally suffered from stage fright, and for a long time I had a good deal of difficulty in overcoming it. It was only by habit and sustained effort that I managed, in time, to master my nerves and so to withstand one of the most distressing sensations that I know. In analyzing the cause of this stage fright, I have come to the conclusion that it is chiefly due to fear of a lapse of memory or of some distraction, however trifling, which might have irreparable consequences. For the slightest gap, even a mere wavering, risks giving rise to a fatal discordance between the piano and the orchestral body, which obviously cannot, in any circumstances, hold the movement of its own part in suspense. I remember at my first debut being seized by just such a lapse of memory, though it fortunately had no dire results. Having finished the first part of my Concerto, just before beginning the Largo which opens with a piano solo, I suddenly realized that I had entirely forgotten how it started. I whispered this to Koussevitsky. He glanced at the score and whispered the first notes. That was enough to restore my balance and enable me to attack the Largo…”