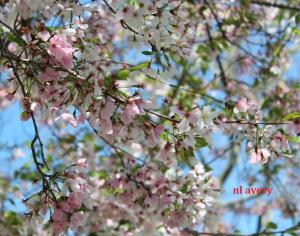 The earth is most ingenious; for her ability to transform herself is akin to our flipping over the days on the calendar. For example, it was only a week or so ago that she celebrated the spring equinox (although somewhat arbitrary depending upon which side of the hemisphere you live) This is an occasion, when put into scientific terms, marks that special moment when the sun crosses the celestial equator going from south to north. At the equinox, Earth’s two hemispheres are receiving the sun’s rays equally…day and nights are approximately equal in length. Hence we get the word equinox from the Latin aequus (equal) and nox (night).

But for earth… this is really just a wardrobe crisis; much like hanging up one’s suit of clothes and exchanging it for another. Here the winter apparel has been put into storage and out comes the spring attire, which to our delight is much more colorful and often rather bold. For like those designers that dictate to us what colors are now “in”, so does Mother Nature play couturier with the seasons, choosing which blooms will festoon the trees and shrubs.

So, now the sun rises earlier, the flowers are sprouting, and the days are getting longer. So it seems that we have more time, an illusion created to fool us into believing that the 24 hours allocated are now more!

Today’s blog introduces the esteemed thinker: Christopher D. Morley (1890-1957), a clever and prolific American journalist, novelist, playwright, and poet. Born in Haverford, PA, he was a Harvard Graduate. Morley wrote for the New York Evening Post (1920-1923) and the Saturday Review of Literature (1924-1941), which he helped found. Out of his keenness for the Sherlock Holmes stories, Morley helped found a group of Holmes enthusiasts, the Baker Street Irregulars. His 1939 novel Kitty Foyle, was made into an Academy Award-winning movie.

Here to brighten your day with a bit of wit and reminder of the vernal equinox and spring; from his book Mince Pie, I bring you the words of Christopher Morley.

“ Once a year, about the approach of the vernal equinox or the seedsman’s catalogue, we wake up at 6 o’clock in the morning. This is an immediate warning and apprisement that something is adrift. Three hundred and sixty-four days in the year we wake, placidly enough, at seven-ten, ten minutes after the alarm clock has jangled. But on this particular day, whether it be the end of February or the middle of March, we wake with the old recognizable nostalgia. It is the last polyp or vestige of our anthropomorphic and primal self, trailing its pathetic little wisp of glory for the one day of the whole calendar. All the rest of the year we are the plodding percheron of commerce, patiently tugging our wain; but on that morning there wambles back, for the nonce, the pang of Eden. We wake at 6 o’clock; it is a blue and golden morning and we feel it imperative to get outdoors as quickly as possible. Not for an instant do we feel the customary respectable and sanctioned desire to kiss the sheets yet an hour or so. The traipsing, trolloping humor of spring is in our veins; we feel that we must be about felling an aurochs or a narwhal for breakfast. We leap into our clothes and hurry downstairs and out of the front door and skirmish round the house to see and smell and feel.

It is spring. It is unmistakably spring, because the pewit bushes are budding and on yonder aspen we can hear a forsythia bursting into song. It is spring, when the feet of the floorwalker pain him and smoking-car windows have to be pried open with chisels. We skip lightheartedly round the house to see if those bobolink bulbs we planted are showing any signs yet, and discover the whisk brush that fell out of the window last November. And then the newsboy comes along the street and sees us prancing about and we feel sheepish and ashamed and hurry indoors again…”