We reside in a world that is large enough to host so many languages that it is quite possible that if all were listed on a sheet of paper, most of us would not recognize to what country they belong. For example in Ethiopia the people speak Tigrinya, Oromo, Gurage, Somali, Arabic, 80 other local languages, and English, while in Bahrain, Arabic (Arabiyya) English, Farsi, Urdu are spoken.

If we were to dig deeper and look inward into a smaller realm, we will encounter sub-languages that consist of terms and words used only with those who are familiar within the a specific specialty. How often do we find ourselves confronted with a legal document that although it may be written in our own “tongue” we still need to take it to a lawyer to translate in lay terms what it means. If we were to read text with regards to computer programming, many would look to a person versed in technology just to translate its content for us.

And so it is the same for those confronted with the sport fishing section of the local newspaper. For here is a sample of an article written for those interested in taking day off with an angler; “Troll small hair jigs, 1-inch tube jigs, or grubs tipped with minnows along the bottom, or fish trout magnets, popeye flies, and small tube jigs tight to brush early in the morning, or later if the water is heavily stained.”…So it appears that a translator is also required to get the full gist! 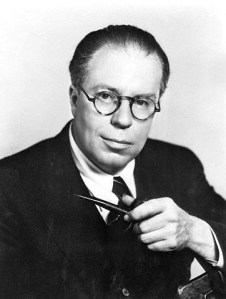 For today’s post I bring back to the esteemed thinker: Christopher D. Morley (1890-1957 ) an American author that has graced the pages of fiction and non-fiction with much of his humor although to our chagrin he has fallen into the world of the more obscure. Best known for his journalism, Morley was also a witty poet, where I have selected a work that further brings testimony to the unforgiving ways that language likes to toy with us. From his book, Mince Pie I bring you a clever piece.

A certain young man never knew
Just when to say whom and when who;
“The question of choosing,”
He said, “is confusing;
I wonder if which wouldn’t do?”

Nothing is so illegitimate
As a noun when his verbs do not fit him; it
Makes him disturbed
If not properly verbed—
If he asks for the plural, why git him it!

Lie and lay offer slips to the pen
That have bothered most excellent men:
You can say that you lay
In bed—yesterday;
If you do it to-day, you’re a hen!

A person we met at a play
Was cruel to pronouns all day:
She would frequently cry
“Between you and I,
If only us girls had our way—!”

Responsibility comes in sizes that mimic the food containers we have become so familiar with at the grocery store. Some are jumbo, too large to be consumed by an individual and therefore must be a shared by many; some are large, big enough for many to par take in; and then there are the individual snack packs, where like some responsibilities they are owned by a solitary person.

Responsibility comes to us by choice, such as when we purchase a dog we take on its care, and other times it falls upon us not by choice but rather by doing what is right, as when a community is befallen by a disaster such as a flood. When responsibilities are considered mammoth, such as housing for the displaced after the aforementioned flood, we generally find an orchestrated group who takes charge; individuals that we trust to coordinate a successful course of action towards recovery, whereby the group’s responsibility can be whittled back down eventually to the individual. Sometimes these “persons” in charge are successful and other times it results in sheer abomination.

We often feel most vulnerable when responsibility is out of our personal control especially during times of catastrophes such as pandemics, war, or earthly disasters. And it is during these times that we either band together in positive support or disband in chaotic turmoil. Along with responsibility comes its nemeses, blame and for some it is an excuse that sweeps responsibility haplessly away as one would sweep dirt under the rug. Do we walk away from responsibility because its original liability was not ours or do we accept it because regardless of its size or source, we know the best way to manage and control is with dependable and trustworthy character.

And so we must ask the question does blame come first or responsibility…but like the age old query ‘what came first the chicken or the egg?’ we must respond with ‘does it really make a difference’?…

Today’s blog presents a most courageous woman who channeled the power of creative responsibly; a woman who took on her nation for the good of the entire population. This most remarkable woman is the esteemed thinker: Clara Barton (1821- 1921) Born Clarissa Harlowe Barton in Oxford, Massachusetts, she began her career as a clerk in the U.S. patent office.

At the beginning of the Civil War she witnessed the early horrors of combat. She realized an immediate need to assist and aid the federal soldiers by collecting food and supplies to soldiers. Though not affiliated with any group or agency she also began to collect relief articles by appealing to the public and prodding government leaders and the army until she was given passes to bring her voluntary services and medical supplies to the scenes of battle and field hospitals earning her the name “Angel of the Battlefield”.

In 1869 she visited Europe where she was introduced to the Red Cross in Geneva, Switzerland. Its founder, Henry Durant, called, “for international agreements to protect the sick and wounded during wartime without respect to nationality and for the formation of national societies to give aid voluntarily on a neutral basis,” This gave Barton the initiative to appeal to the U.S. President Rutherford B. Hayes that the United States needed to sign on. However, as much as it seemed like a good idea it was turned down. His successor President James Garfield was supportive but was assassinated before his final approval. It was however Chester Arthur, in 1882 who finally signed the agreement and a few days later the Senate ratified it. The American Red Cross was formally started.

So, let us give a few moments to read the words of Clara Barton, educator, nurse, and reformer. From her work The Red Cross in Peace and War we read first hand her compelling appeal. I now give you the “angel of the battlefield” …

“Every civilized government is financially able to provide for its armies, but the great and seemingly insuperable difficulty is, to always have what is wanted at the place where it is most needed. It is a part of the strategy of war, that an enemy seeks battle at a time and place when his opponent is least prepared for it. Occasionally, too, an attacking commander is deceived. Where he expects only slight resistance, he encounters an overwhelming force and a battle of unforeseen proportions, with unexpected casualties, occurs. This is the universal testimony of nations. If it were not so, all needs could be provided for and every move planned at the outset.

It was for these reasons that a body of gentlemen, now known as the International Committee of Geneva, aided by National Associations in each country, planned, urged and finally succeeded in securing the adoption of the Treaty of the Red Cross. For these reasons the Treaty of Geneva and the National Committees of the Red Cross exist to-day. It is through the National Committees of the Red Cross in each treaty nation, that the people seek to assist the government in times of great emergency, in war or other calamity. It is only by favoring the organization of this Auxiliary Relief in times of peace, encouraging its development to the highest state of efficiency, preparing to utilize not only all the ordinary resources, but also the generous support of the people, through the Red Cross, that a government may hope to avoid much of the needless suffering, sickness and death in war…”

Today’s blog is a thought; a sigh of words to be scattered and retrieved; an invitation for the undertone of the day…
I give to you my poetic rendering… Peace; if not now when?